Opening night: 13/02/2005
Next performances:
Staatsoper Hannover
Vec Makropoulos
BACK
NEXT 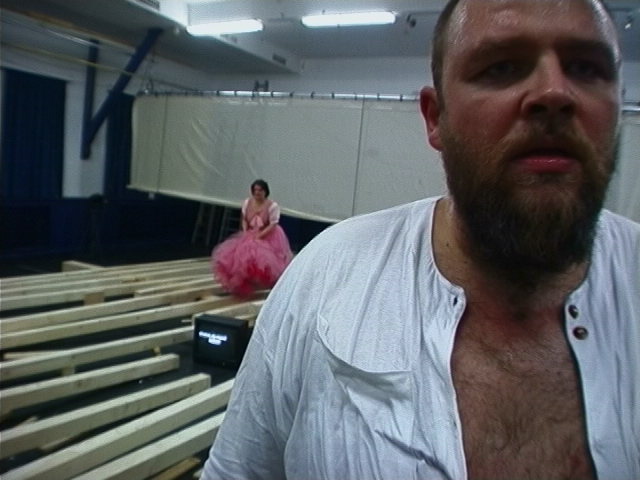 300 years old she is, or so she claims to be; Emilia Marty, the main protagonist of The Makropoulos Affair, an opera diva who’s admired, desired, adored and praised by all.

Yet, or perhaps because of this, she knows exactly how to manipulate this “man’s world” and how to keep it at bay. Could she be hiding a secret behind her many appearances? What is this mysterious “document” everyone is looking for and that purportedly contains a formula for eternal life? What is this frenetic struggle with natural decay and the fear of growing old? A futile struggle which eventually Emilia Marty, too, will have to give up.

When I first heard this opera, I was immediately enthralled by the music; but I just didn’t get the story. What attracted me most was the peculiar breath of the musical score. It carries an energy that doesn’t expresses itself in rounded curves, but in jerks and starts. It’s like dancing on a wooden leg. But what was I supposed to make of this complicated plot about a woman aged 360 years? This story with characters who, with the exception of the main protagonist, are barely sketched out? They resemble spirits whose only purpose is to possess this woman. How can a story that only becomes accessible after several readings ever make sense to an audience after a single performance? And in Czech no less! As far as recognisability is concerned, there would, at first glance, appear to be hardly anything in opera that refers to everyday reality. I, for one, put the text aside in despair on several occasions, not knowing how to deal with it. Until I tried to focus, not so much on the certitudes, but on the questions the story evokes.

First and foremost, there is Emilia Marty, the only character whose actions are complexly human. With her fads and fancies of a spoilt, grown-up child, she determines the twists of the plot. She is the plot, the centre around which men gravitate and gladly allow themselves to be manipulated. They are inconsequential characters, lacking any coercive power, with the exception of Jaroslav Prus, the demonic holder of the document with the “formula for eternal youth”. The shady figures that circle around her add a dreamlike perspective to the story. Is this the fantasy of a woman who is desperate to remain young, attractive and, above all, powerful? Like Bette Davis in “Whatever Happened to Baby Jane”?

What is so fascinating about this dream perspective is not so much the longing for eternal youth, but the root cause of this longing, which is universally recognisable, namely “fear of decay”. This fear turns Emilia Marty’s dream into a nightmare that we all know and acknowledge: the fear of no longer belonging, of not receiving recognition, of being forgotten in the midst of the masses.

But the remarkable motivational shift that Emilia Marty undergoes is equally striking. During the first and second acts, she has the situation firmly in hand; she leads the men wherever she wants, even though they come pretty close in the night-time scenes of the second act. To accomplish her goal of obtaining the document with the “formula”, she ultimately has to give in to Prus’s desire. After this rape, she suddenly acts as if she doesn’t care about either the document or her offspring. She gets drunk, faints, comes round again and claims to have had a near-death experience, gives away the magic formula, and sings “Our Father” until she reaches a state of delirium. She talks about her own father, who tried out the formula on her when she was a child. Is this the nightmare of a woman who is afraid not only to die but, above all, to live? Who constantly tries to keep life at bay? A life that tries to impose itself on her in the shape of herds of longing men. A life that approaches so near, becomes so intimate, that it takes a hold of her through Prus, and eventually even rummages through the most private of her possession: her travelling case. After this act of violence, Emilia Marty loses any semblance of a façade, and, through the alcohol, she forces herself to surrender. This would appear to be the nightmare of a woman who, throughout her life, has hidden behind the masquerade of an enchanting opera diva. Is she hiding a secret that prevents her from participating in this life? That compels her to keep these longing men at a distance? Has the magic formula for eternal youth which her father once tested on her made it impossible for her to take live life fully? Is the “Makropoulos Affair” the nightmare of an incest victim? Of someone who must or wants to remain a child, an eternal virgin, out of fear of sexuality? Because it is reserved for her father, whom she religiously sings the praise of in the final aria? In her nightmare, it seems as if she’s been on the run for all of 360 years, constantly assuming different names in order to escape from the desire that pursues her with increasing despair; distraught, drunk and aggressive. But this nightmare teaches her that life is stronger and that she must give in if she is to achieve her ultimate goal. Not to attain eternal life, not to cling on desperately to the past, but to let go of her fixation and to die just like everyone else.

And then there’s the peculiar relationship with Jaruslav Prus, the owner of “the document”, the will that contains the magic formula and stipulates the inheritance rights of her illegitimate son Gregor. He’s prepared to give her that will, on condition that she give herself to him as a woman and recognise that she is the mother of the wandering Gregor. He presents her with a choice: to go on living under an alias, which would seal her own fate and that of her son, or to admit the truth, to accept her rights and obligations as a mother, and to save her son from beggary. The struggle for power that unfolds between Emilia Marty and Prus suggests that mutual injuries have been inflicted, deeply rooted in a distant past. 100 years according to Prus. Is Gregor the unwanted child Prus left her with? Unwanted because imposed? Is that perhaps the reason she’s been running for 360 years? Is she confronted in her nightmare with her own motherly instincts, which compel her to relinquish her autonomy and, above all, her sexual aversion, and to choose for her role as a mother?

I see a woman in a bridal dress on a seesaw. The eternal child-woman, waiting for her knight in shining armour. But none of the prospective wedding partners can compete with “pater hemon”, our father. What follows is a stampede of groomsmen, who in turn are reminiscent of previous generations of groomsmen, who in turn remind us of groomsmen of all times and places. The eternal virgin waiting for her saviour, in a space marked by decay: the worn floor of what might once have been a ballroom or a gymnasium. A space fraught with sexual tension which she not only provokes but also manipulates, until she is no longer able to escape. On the seesaw, a remnant of the youth she can barely let go of, Prus takes her brutally, forcing her to concede that she is Elina Makropoulos, the missing mother of Gregor the lost son: the key to this absurd nightmare. After this turning point, we follow an ascending line to the Song of Our Father Who Is in Heaven. And so appear from the depths of this strange story the veiled scars of a very familiar human tragedy.

I see a woman in a bridal dress on a seesaw. The eternal child-woman, waiting for her knight in shining armour. 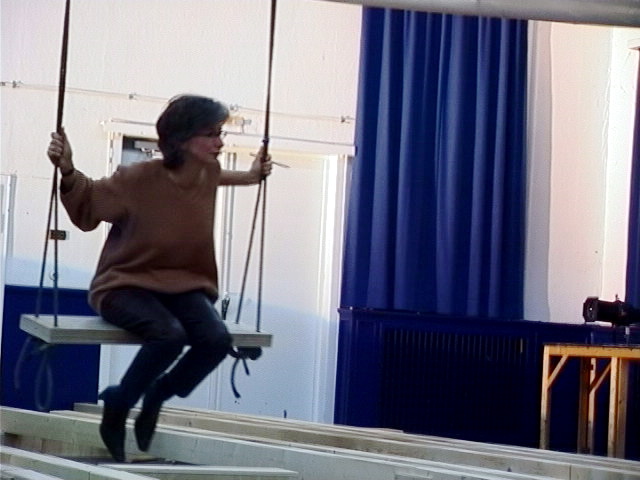 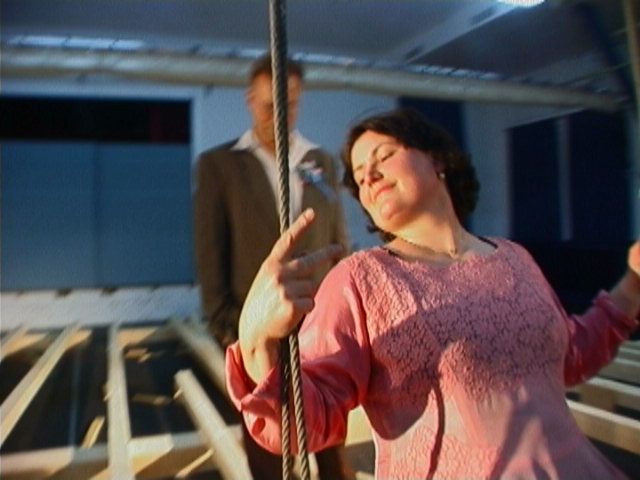