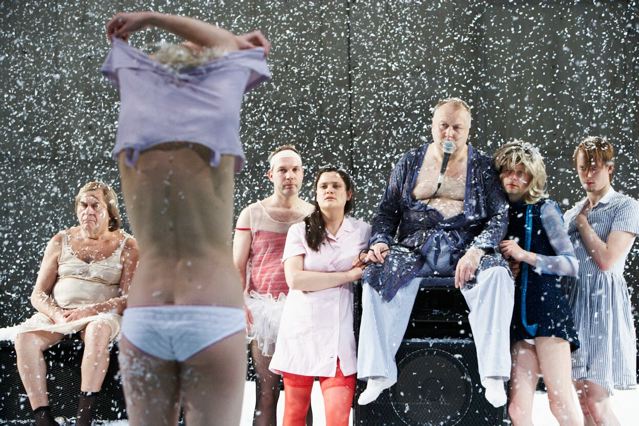 The Misanthrope, Don Juan, Tartuffe and The Miser combined into a single life line.

Feridun Zaimoglu, Günther Senkel and Luk Perceval (Othello, LULU Live) wrote this adaptation of Molière’s four major works, for a single lead actor, so that the plays become four stages in a man’s life: an evolution from utopianist to demented old fool.

The Misanthrope, Don Juan, Tartuffe, The Miser.
Four plays which Molière not only wrote, but also produced and directed, and in all of which he most probably also played the lead part. Until he literally dropped and died on stage. A man who burnt himself out in the focal point of his world. With his plays, he was able to please “le roi soleil”, as a jester. As an unsuccessful author of tragedy, he had to try and salvage his life through self-mockery. He was ,,un grand provocateur” who spared no-one, particularly not himself.

As the Misanthrope, he vents his self-hatred onto the world. He hates the world and, and the same time, hates the very fact that he hates it. He is pathologically jealous of his lover, because he already knows that ultimately she will leave him. His disbelief in a “happy ending” demands counterproof from his environment. But the “man at the microphone” is abandoned by his company. And that is how he had imagined it would be: alone in the street, like a Don Juan, tired of the self-hatred, and therefore cynical. Even masturbating no longer brings relief. Disgusted with life, he is prepared to embrace death. But that doesn’t work either. Condemned to live on, his only way out is religion. That “hole in his chest”, demands a universal answer. With the answer he finds as Tartuffe, he fulfils the lives of those who possess everything accept “a universal answer”. As a cynical Guru, he mobilises masses of passionate proponents and opponents; his ego acquires the patina of wisdom. Only when all have relinquished their faith and their precious possessions, and suddenly become aware of the pain in their sphincter, do the masses stir; when all is already lost, as the Guru already has them in his totalitarian power.

Many years later, the Guru sits on his heaps of money, like a decrepit miser, pissing down onto the world. His relatives circle like vultures around the stinking flesh of his decaying body, waiting for the final breath. His aria of death is like a prolonged rattle by his fading consciousness: So much for God and the world. Nothing is forever. Furious with unfulfilled longing, he craves for death: “please unplug me”. But the “prayer of desire”, the hunger for salvation, drives his heart on until it can take no more.

Molière’s “danse macabre” is like the self-combustion of his own stage-thirsty ego, which, to the immeasurable pleasure of the audience, he shamelessly displayed, le roi inclus. He ridiculed his self-hatred, his cynicism, his distrust and his contempt for death until he could go no further; up to the point where, exhausted like a fish out of water, he floundered into the netherworld. 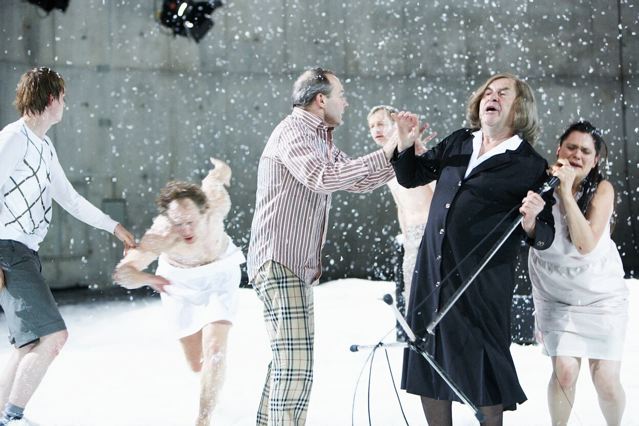 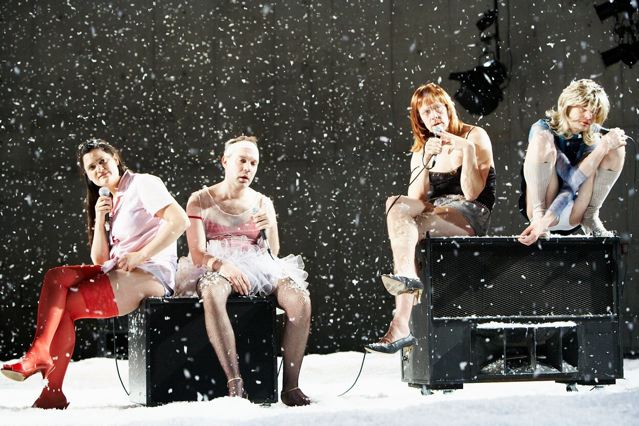