Opening night: 25/03/2004
Next performances:
Bourlaschouwburg Antwerpen
Macbeth
BACK
NEXT 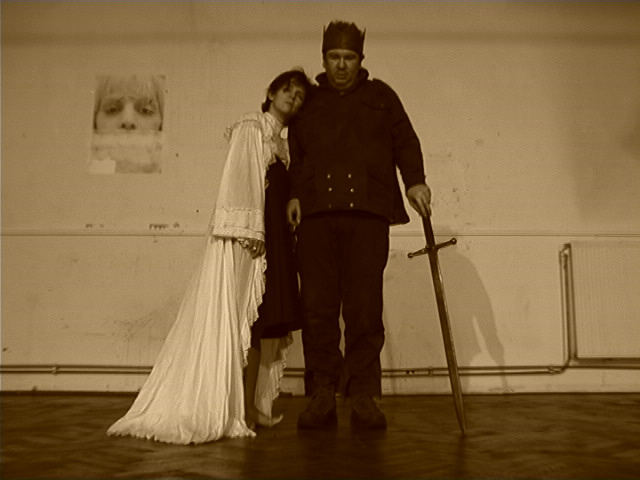 “Life’s but a walking shadow, a poor player
That struts and frets his hour upon the stage
And then is heard no more. It is a tale
Told by an idiot, full of sound and fury
Signifying nothing”

With these words, Shakespeare’s bloodthirsty hero Macbeth reaches his end, looking back on a life driven by an unfulfillable longing for happiness and immortality, stumbling over the sense of the senseless… signifying nothing.

Macbeth by Gerardjan Rijnders, or a “huis clos” of two desperate souls. Macbeth in a centrifuge. A story that begins with a dark fairytale ” a self-fulfilling prophecy” that develops into a paranoid reality, a nightmare in which the two main protagonists become lost in the labyrinth of their own delusions and lies, condemned to existential loneliness in this harrowingly poignant adaptation. Life as a never-ending dream, ” a tale told by an idiot, signifying nothing”.

The childless existence of Macbeth and his Lady, exacerbated by a stillbirth, is of central significance as a symbol of finiteness and mortality. For Macbeth is about the struggle with “a man not born of a women”, God. A struggle with eternal life, the universe, nature, represented by the many children in this story (Malcolm, Donnalbain, Fleance, Macduff’s children), a struggle with one’s own decay, resulting in mortal fear, paranoia and isolation driven to extremes. As a man and husband, Macbeth is impotent, so that he feels compelled to prove his love on the social ladder, very much against his own will. But duty is duty, and every step is a step of no return.

With every death, the crowd of enemies grows, until his kingdom consists only of potential enemies. Left without a son and successor, all he can do is drown like kittens the youth who might one day rob him of his power. At the end, he stands alone against an army of desperate mothers and orphans, led by “a man not born of woman”. With Macbeth, Shakespeare not only demonstrates that survival instinct can turn any human into a murderer, but, through the presence of witches and the frequent occurrence of natural phenomena, he also evokes a holistic worldview; a story of creation in which all phenomena are interconnected, in which the pounding of the wind and the shaking of the earth are a reflection of the emotional highs and lows of man, and in which the three witches are a mirror of the functioning of the ego: one witch expresses his dissatisfaction with what Macbeth used to be (Thane of Glamis), another expresses his ignorance of what he is now (Thane of Cawdor), and the third tells him what he is dreaming of (becoming King of Scotland). Thus we are presented with an image of the condition of the human mind: frustrated about the past, blind to the present and longing for invulnerability/immortality. Banquo is Macbeth’s conscience; he is aware of his desires. He will follow him every step, up to his deathbed. Ultimately, Macbeth is overcome by “a man not born of a woman”.

If Shakespeare hid any message of hope in this darkest of plays, then it must have been this: that nature always cleanses itself of its enemies, time and again, with new murderers.What fascinates me about Shakespeare is that he confronts one with one’s own existential fears: the jealousy of Othello, the loss of power of Richard II, the self-destruction of Richard III. In fact, he is a horror writer who builds his plots around two themes: sex and death. In this sense, Macbeth is a model story. It is an evocation of man’s worst fears: dreaming of more, more becomes too much, loss of control, that body you would like to bury at the bottom of the sea but that keeps on resurfacing, the indelible murder. And then the greatest fear of all: the fear that the dream is or will become reality.

Macbeth is a thriller, a maelstrom of horror, which inevitably sucks the reader in. Shakespeare also uses a thriller structure. Bit by bit, what everyone knows and fears unfolds. Names such as Hitchcock, Lynch and Polanski inevitably spring to mind. Shakespeare’s natural imagery is also reminiscent of the clichés of the horror genre: night owls, horses gone wild, toads, witches, nature running rampant. However, the question arises: how can all this be evoked on stage? For any attempt to translate the horror and Shakespeare’s images one-to-one will shatter the secret and thus the narrative tension. For this reason, I believe that the play should be staged with a great sense of realism. No illusionist theatre, but a location project. Or by transforming the theatre into a location. In the Bourla Theatre, for example, one could seat the audience on the balconies and use the entire floor as a stage. This way, the audience is no longer watching a box in which all the action unfolds, but looking into a snake pit.

Any theatrical hocus-pocus is to be avoided, and every direction from Shakespeare should be followed as literally and realistically as possible. The cast is not just made up of great actors, but, as in Fellini’s work, also includes real people, branded by life: old people, child soldiers, etc. It is also a cast that expresses the great oppositions in the play (old/young, guilt/innocence, good/evil, death/life). 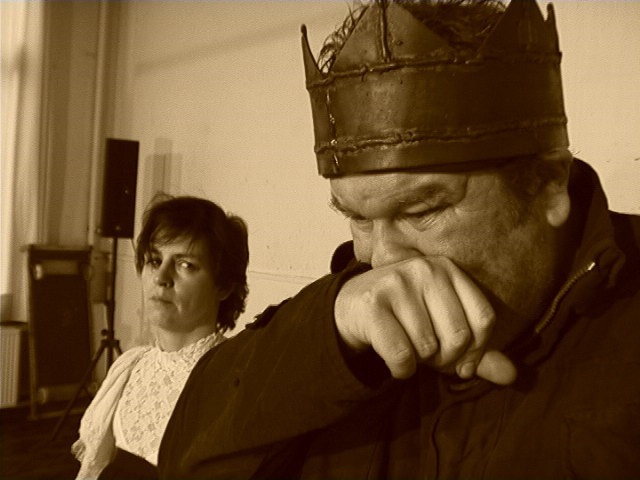 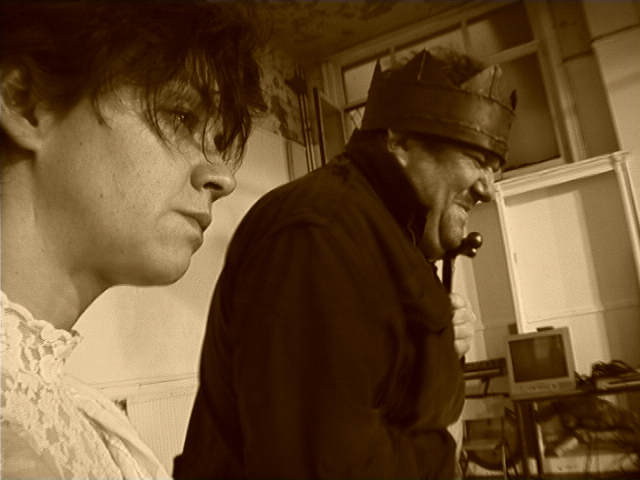